Republican presidential candidate hopeful Donald Trump’s campaign lasted far longer than most expected, giving him ample time to make his fair share of controversial statements in 2015. Mind you, he’s made a lot of outrageous comments in his lifetime, but here are 15 of the worst things Donald Trump said last year.

You have to figure things have to be pretty bad if NBC, which hosted Trump’s television show The Apprentice, decided to cut its losses and sever ties completely after Trump said this:

When He Called U.S Leaders Stupid

We’re not so sure this is how Mexico’s foreign policy agenda works.

“Our leaders are stupid. Our politicians are stupid. And the Mexican government is much smarter, much sharper, much more cunning, and they send the bad ones over because they don’t wanna pay for them, they don’t wanna take care of them, why should they when the stupid leaders of the United States are doing it for them?”

When He Said He’s the Best at Building Walls

Do you have a resume for that, Trump?

And Yet, When He said

As if he could possibly convince anyone to believe he’d have the Latino vote.

We’re assuming he had to insult her face because he forgot anything relating to her political stances. He had to do some serious backtracking after this one, later calling her beautiful.

“Look at that face! Would anyone vote for that? Can you imagine that, the face of our next president?! I mean, she’s a woman, and I’m not s’posedta say bad things, but really, folks, come on. Are we serious?”

Never scorn a woman aging, Trump.. especially when she ages as beautifully and as gracefully as Heidi Klum. Is there any hope for the rest of us gals to be viewed as beautiful in Trump’s eyes?

When He Hinted His Policy on ISIS Is To Take Back the Oil (????) 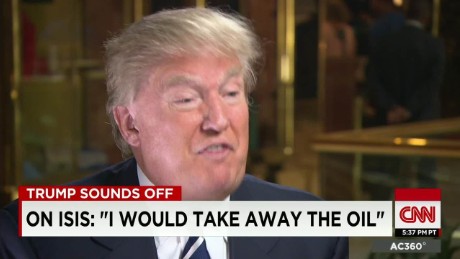 Big head scratcher, this one is.

“They just built a hotel in Syria. Can you believe this? They built a hotel. When I have to build a hotel, I pay interest. They don’t have to pay interest, because they took the oil that, when we left Iraq, I said we should’ve taken. So now ISIS has the oil.”

When He Promised to Create a Nuclear War

Clearly, he doesn’t realize that most Americans would not support the start of a nuclear war we’re all terrified of.

“I would bomb the hell out of those oilfields. I wouldn’t send many troops because you won’t need ’em by the time I’m finished.”

When He Said This Three-Word-Sentence That Shocked the Nation

Everyone knows that Trump and Rosie O’Donnell do not get along. But not everyone could anticipate that he would take to a national stage during a presidential campaign to insult her. When moderator Megyn Kelly asked Trump during a GOP debate why he has called  “called women fat pigs, dogs, slobs, disgusting animals” in the past, he responded with:

When He Said Something So Bad, He Deleted It

Trump doesn’t usually take back the horrifying things he says, but this time, he was forced to delete this Tweet. Too bad people still saw it.

“If Hilary Clinton can’t satisfy her husband, what makes her think she can satisfy America?”

When He Lied to Everyone

He said he was planning on being respectful to his fellow presidential candidates, but he’s badmouthed each one in low-blow ways throughout his campaign.

“[I]t is certainly my intention to be very nice & highly respectful of the other candidates.”

When He Made You Feel Bad for Rick Perry

“Rick Perry, I don’t think even understands what he is saying.”

“When someone crosses you, my advice is ‘Get Even!’ That is not typical advice, but it is real life advice.

When He Ignored Real Problems the Country Has

Like the need for decreasing the achievement gap in America’s schools, or getting America off of 80 percent of the world’s opiates to name just a very few real-world problems.

“I think the big problem this country has is being politically correct.

When He Fear-Mongered Using the Country’s Worst Fear

“I really am convinced we’re in danger of the sort of terrorist attacks that will make the bombing of the Trade Center look like kids playing with firecrackers.”