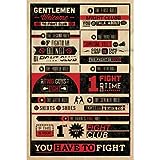 
In life, we’re trained to continually excel. Or maybe constantly be attempting to find the next “thing.” In life, it’s actually alright to fail due to the reason that the lowest points in one’s life result in most growth.

There you have our collection of 24 Fight Club Quotes, Sayings and Images. Fight club is not just about a movie, but it opened the minds of the people as it teaches a lot with regards to our society. Just how great the movie is, the Fight Club Quotes has really caught the a lot of people and has been an inspiration. What’s your favourite Fight Club Quotes? Come and share it with us or on through our Social Medias.

Get a Brotastic surprise