One-of-a-kind entertainer Kesha is in the middle of serious legal troubles after losing her injunction bid against her music producer Dr. Luke, who she says physically and verbally abused her for the years she spent working with him. She was denied getting out of her contract by a judge who said she could easily work with another producer in the company instead, which led to the heartbreaking sight of Kesha breaking down into tears.

We figured Kesha could use a reminder of all the times she inspired other people- and maybe her own words can inspire her to find the strength to keep pushing through the challenges that face her.

Here are 14 empowering quotes from Kesha.

Just because I’m sassy and have a mouth on me doesn’t mean I’m coming from a negative place.

I wouldn’t have a No. 1 record or song if I wasn’t a hardworking person.

Sometimes it is hard to sing and dance at the same time, but I would rather be off and be real and genuine about it to my fans.

Every weird thing about you is beautiful and makes life interesting.

I don’t really plan what comes out of my mouth, and that’s what makes most of my lyrics entertaining. What I’m bringing to the pop table is that I’m not pretentious.

I’ve always been loud and obnoxious and sneaking my way into things, and so I feel like I’ve snuck my way onto the Lollapalooza lineup, and I’m going to sneak my way into whatever else I get to do.

I don’t have the best body in the world, but I know for a fact that I have a really good voice.

It is so fascinating that someone can commit their whole entire lifestyle to being such a fantastic woman when I’m such a bum about it.

I am in love with what we are. Not what we should be.

You can’t be a victim. You have to be a warrior.

…if you put out positive vibes to everybody, that’s all you’re going to get back.

Give the haters the finger and be yourself. 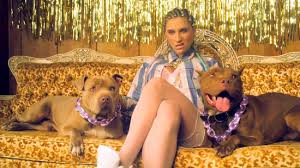