There is so much to be said about the former relationship between Hollywood icons Jennifer Lopez and Ben Affleck.

To start, their relationship started the trend of fusing together dating celebs’ names. If there was no Bennifer, who the heck knows if there’d ever be Brangelina.

Further, they created the absolute worst movie of all time together- and there’s something amazing to be said about that. Just like starting the celeb-name-fusion, they also created history with the God awful film, Gigli.

But what’s also awesome about the former relationship between Lopez and Affleck is that Lopez has no problem throwing serious shade Affleck’s way every time and again, and neither does Affleck. Here are the top six times Bennifer 1.0 threw shade at each other.

“They Should Be Cooler”

“It’s awful! What are you doing? His tattoos always have too many colors, they shouldn’t be so colorful. They should be cooler”

“You’re a Movie Star! You Should Wear A Suit.”

“I did, kind of like, say, ‘You’re a movie star! You should wear a suit. You should do this with your hair.’ For sure!”

“At Least They Had to Say ‘Alleged Killer”

“What was that guy’s name who killed his wife and dumped her off the side of a boat? Peterson. I remember thinking he actually gets slightly better treatment than I do in the press. At least they had to say ‘alleged killer.'” 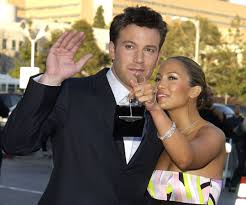 “You Can Only Handle So Much”

“You can only handle so much. I moved for a while to this place in Georgia that I have, was able to get away, by and large, from stuff.”

-Affleck on needing to get away after the break-up

“I felt suffocated miserable and gross. I should never have gone down that route or got sucked into all the publicity.”

-Affleck on feeling suffocated during relationship with Lopez

“Always Something I knew Would End”

“We did fall in love and we were very close. But my relationship with him was always something I knew would end.”

-Lopez, reflecting on her break-up with Affleck